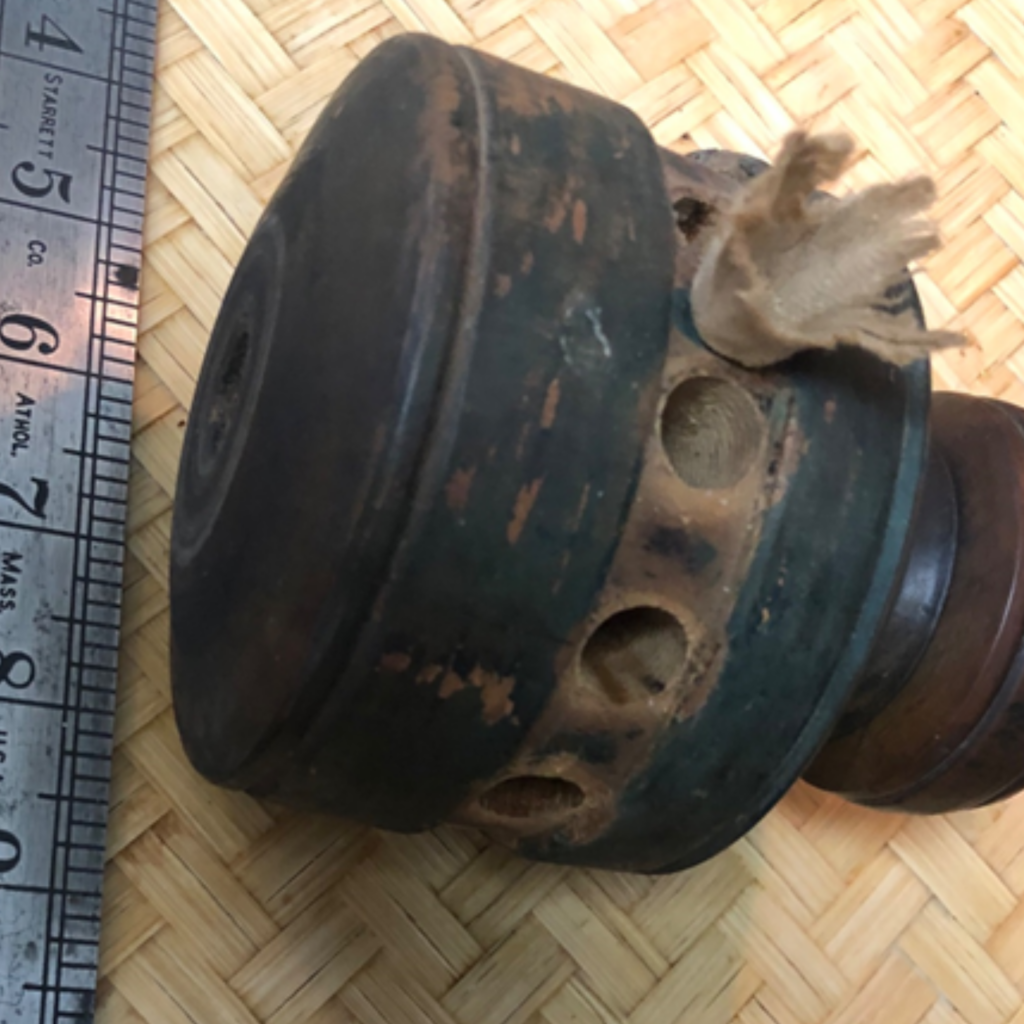 Am I the only one who wonders–sometimes marvels–at the simple technology and creative solutions used by people in the past? Don’t get me wrong…I’ve been known to reach for epoxy and Gorilla glue plenty of times, but what were the “fixes” for the many hundreds of years of furniture and cabinet making before synthetic glues? In our rush for easy and permanent solutions, have we thrown some babies out with their bathwater?

What led me to this musing was the dissection of the damaged spokes from the hub which revealed some curious fabric squares and an absence of even the tiniest remnant of hide glue. The unbroken spokes were all tension-fit into their respective holes with matching coarse fabric squares. Being perplexed in the internet age leads one to social media; therefore, my father and I posted our surprising find on a Facebook group devoted to Great Wheels. {FYI, it’s not hard to find this group…shocking, I know, but there aren’t that many to choose from!}

And we discovered that Ms. Lizzie had been…HEMPED!

I’ve spent years in middle school classrooms, so you will have to forgive the adolescent humor reference here. Anytime I find a word that is, shall we say, unusual…I imagine saying it in front of a room full of 7th graders and it’s mildly entertaining. My adult-onset-ADD apologies for this diversion.

Here’s the response from the spinning expert: “In my experience, friction fit is the norm.  I have never seen glue in great wheel spokes except for clumsy attempts at repair.  In fact, in North American wheels, glue seems to be pretty rare. Some pieces are pegged, great wheel spokes are generally nailed (sometimes pegged) into the rim, but most wheel pieces are designed to allow for expansion and contraction. As I said, the most common fix I have found for loose joints in my old wheels has been a piece of linen, similar to what you showed and I have found that it works quite well to tighten the joint.  The only thing I ever glue in a wheel is a piece that is broken, such as a spoke broken in the middle or a table cracked down its length. Great wheel spokes can be pretty funky movement-wise.  I shim them if they really move a lot but, other than that, live with some movement. It shouldn’t affect the spinning.”

She included a link to the always-informative, personally delightful, and incredibly talented Alan and Milissa Dewey: Bobbin Boy from Asheville, NC. Milissa added that the fabric was often impregnated with warm, liquid beeswax which would then solidify and hold tight in the joints when cooled. This would also allow for the wood to adjust to changing temperatures and humidity. So clever and so purposeful! (Click here for a Bobbin Boy Facebook video Hemping the top of a wheel upright.)

So now, you might think that the restoration technician would just melt one of the candles from the closet for the wax but you would be wrong. “Those are paraffin” he says as if I had suggested that he serve mackerel with merlot. He assures me he’s ordered real beeswax from eBay. And when I see him for his birthday lunch, he tosses me a peanut-butter jar with some beige stuff in it…