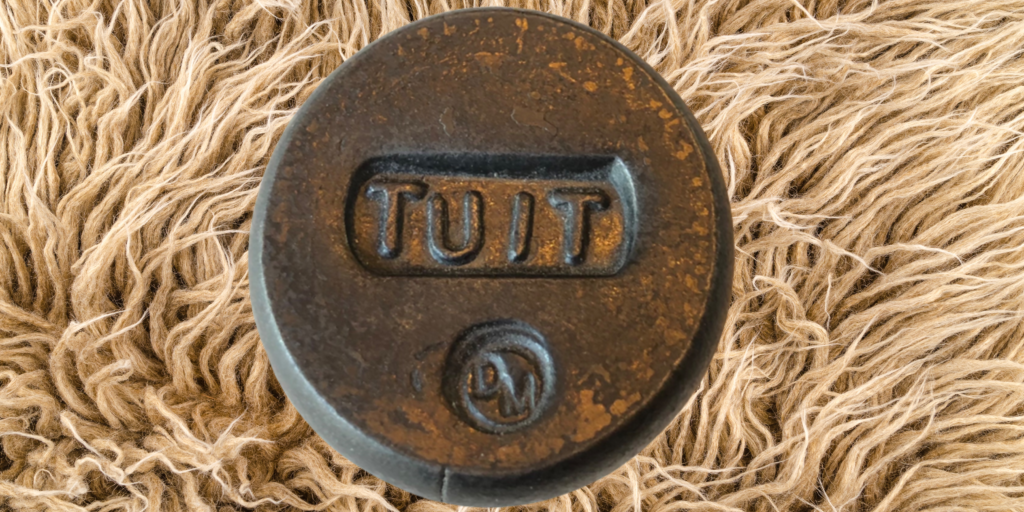 Poor Ms. Lizzie has been waiting since Spring for my dad to “get around to it” and repair the spokes and rebuild the wheel. I reminded him that I had purchased him a “Round Tuit” several years ago and that he has no excuses. He blamed it on his adult-onset-ADD and the change of season and hummingbirds and car races and Joro spiders and lots of other diversions. But, nevertheless (and it’s doubtful that Ms. Lizzie even noticed the months’ passing since she’s quite the old gal), I was shocked when my dad said the wheel was ready to be reunited!

Luckily my dad enjoys dog-sitting, and this past weekend he got some quality time with LuLu and a bonus visit with the grandson (with a big BBQ sandwich to boot). Dad offered to drive the pooch from Gainesville to Sandy Springs – which is quite the adventure these days due to all the highway construction making the usual nightmare Highway 285 extra spicy. It has to be a very special event to entice him to be behind the wheel in the greater Atlanta area–usually, we meet out in the exurbs for dog transfers–and him seeing the spinning wheel working was clearly enough enticement. After the dog calmed down enough to allow us to do anything other than paying her full attention, we got the wheel from the van.“Well, I don’t have much faith in this wheel working. She may be nothing more than a pretty spinning wheel-shaped object. Don’t get your hopes up.”

We brought the wheel over to Ms. Lizzie and gently slid the hub onto the axle. Even my husband broke away from a work conference call to come downstairs to see. While I sought some cotton crochet yarn for a drive band, the dudes turned the wheel and assessed its trueness. My husband, being a lifelong cyclist, is the self-appointed expert on wheels with spokes. I tied on the drive band and turned the wheel and the spindle started flying in its newly made copper-lined leather bearings – ready to turn fluffy rolags into yarn.

After the anxiety and apprehension about the wheel working again were gone, the step-by-step description of the repair ensued. Many of the spokes were actually broken at the hub, so Dad got a dowel piece and whittled it to the dimension of the hub holes. He then “hemped” the spokes that were not broken and the dowel pieces. He screwed a long screw into the dowel and epoxied the screw head and threads into a hole he drilled into the spoke–you can’t even see any of this unless you REALLY look hard and know what you are looking for. Then the spokes were attached to the rim with small brass screws just outside of the channel for the drive band so it wouldn’t cause any issues with snagging the band. Dad apologized for the historical inaccuracy of the brass screws–apparently, Phillips-head screws didn’t come into use until the 1930s. I think he gets a pass on the accuracy factor because this girl feels so solid being turned and she is ready to live another century or more.

Unanswered questions remain – why 11 spokes? Why is there the concave nature of the wheel given that it was extra difficult to make the hub have the holes at a slant? Why do four spokes have holes in them out near the rim? (I’ve seen wheels have holes in the spokes to insert a dowel to wind off the yarn like a swift, but this is so asymmetrical it makes no sense). What do the designs in the paint on the wheel’s table mean? I think we will never know the answers to some or maybe all of these. If you have any answers, drop them in the comments or email me: at info@fiberartsalliance.org.

Now to oil her up and spin some fluff!